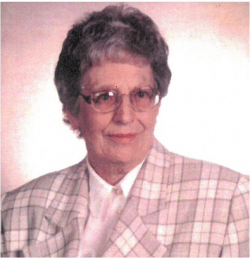 Louise Hessian – a devoted teacher and an Islander for almost 99 years – died June 16, 2022, in Charlottetown.

Gertrude Louise Hessian was born September 15, 1923, the second daughter and third child of Eda Prowse from Murray Harbour and Jimmy Hessian from Georgetown.  As was too true 100 years ago, tragedy came often. Her sister Helen died at age 3 on Christmas Eve 1929 of an infection, when Louise was 5. A younger sister, Phyllis, almost died; these were the years before antibiotics were discovered.  Their father, an engineer for the CNR, was killed in 1932 at age 49 when another train plowed into his train, near Tignish. Eda was left on her own to raise four children under age 13.

A great believer in the value of education, Eda moved the family to Charlottetown to take advantage of better schools. It was a wise decision. Louise and her three siblings all went on to successful careers and happy lives.  After training at Prince of Wales College and earning a certificate in special education at St. Dunstan’s University (now the University of Prince Edward Island), Louise taught in the Charlottetown schools for 44 years, including Queen Square and Saint Jean. She guided thousands of Islanders toward adulthood. Except for spending 1957 to 1959 teaching at a Canadian army base in France – an experience she loved – she always lived in downtown Charlottetown.

Louise was a long-time parishioner at Holy Redeemer, a member of the Catholic Women’s League, and an avid bridge player who was still making bids into her 90s. At any age, she could dismantle a lobster with expertise.  Never married, she was a frequent presence at Christmas and other family occasions in Montreal, Ottawa, and Burlington, Ont. There she kept her siblings and their spouses up to date on all the latest goings on in PEI.

Louise had admirable personal habits that enabled her to live an active retirement for almost 30 years. Only in the last few years did her health decline. The family wishes to express our great gratitude to the caregivers at Geneva Villa and the Atlantic Baptist home and to her family physician, Dr. Jason Thompson.

In keeping with her family’s lifelong devotion to education, her estate will fund the G. Louise Hessian Scholarships at the University of Prince Edward Island.

As she wished, the funeral will be held at Holy Redeemer on Saturday, July 2, at 10:00, with burial to follow in the Georgetown cemetery. All are welcome to attend. Arrangements are under the care of Hennessey Cutliffe Charlottetown Funeral Home.  In her memory, donations may be made to the donor’s charity of choice.