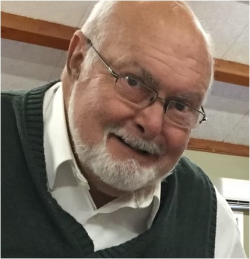 Abelshauser, Robert Joseph Francis (1943–2021). Bob, as he was affectionately known, passed away in his chosen home of Prince Edward Island on October 10, 2021. He was predeceased by his wife, Linda Knox, and he is survived by his children, Shelley (Wendy), John-Paul (Romnick), Jackie, and Kathy, as well as his brother, Melvin (Fanny), his Ma Tante Germaine, and the Knox and Peters families.

Bob was born and raised in Montreal, and he moved to PEI after Linda passed away in 2008. Linda, a PEI native, and Bob spent each summer in PEI with family. Bob was a life-long Montreal Canadians fan, he loved all animals, and he had a deep respect for music, especially the Blues. One of his special memories was his trip across Canada with his good friend Diane. Bob worked at many iconic Montreal restaurants, including The Montreal Steakhouse, Pumpernicks, 555 Dorchester, and Brasserie Bonaventure. He eventually switched gears and spent many years as a doorman at 250 Clark Avenue in Westmount.

Bob took great pride in his 40+ years of sobriety. He was an active member of AA until the very end – even joining and speaking at meetings online via Zoom in recent months.

We would like to extend a heartfelt thank you to the entire medical team in Unit 8 at QEH.

Resting at the Hennessey Cutcliffe Charlottetown Funeral Home. A celebration of Bob’s life will be held in the funeral home chapel on Thursday, October 14th at 10:00 a.m. by invitation with interment to follow in the Roman Catholic Cemetery. You are also invited to join in the celebration via live stream by visiting Bob’s obituary at www.islandowned.ca.

In lieu of flowers, please consider making a donation in Bob’s name to the PEI Provincial Addictions Treatment Facility or Elderdog Canada.