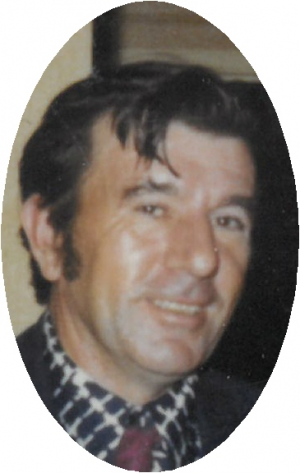 Joe Van Den Bremt was born in Belgium in 1931, in Halteert. He grew up in a family of 10 and during the Second World War was engaged at 13 years of age in the Black market to keep his family alive. After the war Joe began racing bicycles in 1946 and was able to win a few competitions. There was a club for him that the locals contributed to with hopes that his riding skills would get him to the Tour de France. Joe described his first bike, found in a junkyard, with no tires, only rims and no seat, only a rag on the post and yet coming in fourth place with it in a local race.
His bike racing career was interrupted in 1950 when his younger brother was conscripted to join the Belgium army. Joe volunteered to take his place and became a cook for 2 years in the infantry. His tour was in Germany border waiting for the Russians to roll into Europe. It was a tense time and there were a couple of times that it was felt that another great war was imminent.
Joe immigrated to Canada in 1954, his sole purpose was to make enough money to pay off the family home in Belgium and then go back to resume his bike racing career. The transatlantic trip was on a tramp steamer that was caught in an enormous winter hurricane. The storm was so bad that the trip was delayed by six days and Joe was required five times to get the life jacket on with his passport stuck in it to be ready to abandon ship. The ship eventually landed in Boston, where he was met by his sponsors, the Van Keymeulens. He worked in a butcher shop owned by Henri Van Keymeulen in Delhi, Ontario. Unfortunately, this job only lasted six months and then he was able to secure work on a tobacco farm owned by Van Keymeulen’s cousin. Joe became like family to the Van Keymeulen’s and went to Detroit in 1955 with the oldest brother Joe to get into building homes. Unfortunately, America forced Joe to join the National Guard. Joe explained that he had already done his civic duty in Belgium and had no interest in joining another army. He ended up going back to Canada and was considered AWOL in the USA and stayed away for many years for fear of arrest. Back in Canada, Joe had fallen in love with Henri’s daughter Agnes. He started working at the Canadian Wire and Cable and started the union there, working his way up from a lead hand to a foreman. He married Agnes in 1959 and had 2 sons, Henri in 1960 and John in 1961. He bought a tobacco farm in 1968 in Greenfield, Prince Edward Island (PEI) and moved the family to PEI in 1969.
They grew tobacco from 1969 to 1975, during this time he became champion tobacco grower twice for PEI, three times for the Maritimes and winning the world Championship in 1973. By winning the world Championship, the price of tobacco in PEI was finally bought at the same price as Ontario as the cigarette companies would say that until it was proven that the quality was the same as Ontario, the price could not be the same, a discount of 10 cents a pound. Joe was able to make the industry more viable in PEI by this world win for which he was awarded the Agronomist of the Year award in 1974. The farm was sold in 1976. It was at this point that Joe turned his attention to the potential of growing mussels at a commercial scale in PEI. This had many obstacles as most people thought that the native mussels were unfit for human consumption and was garbage to be scrapped off the boats. Joe persisted in the face of widespread skepticism motivated by the popularity of mussels in Europe.

This was all novel to both PEI and the federal government of Canada. There existed no license nor jurisdiction between governments for this new industry. At one point, Joe had his name on all of the viable growing leases of PEI as not one fisherman wanted anything to do with mussel growing. Joe eventually would release the leases and keep two primary ones, in the Cardigan and Boughton rivers. As Joe had no idea how to grow mussels he went to Europe, specifically Spain, France and Holland to see how they grew mussels there and brought back an expert to confer with provincial and federal fisheries to work out a plan of growing mussels in PEI. Nowhere in Europe did they had to contend with one meter of ice in the winter and so Joe had to come up with new procedures and invented new machines to grow mussels in Canada. These procedures and machines are still used in various forms today.
Joe also had to create new markets in North America for a product no one had heard of before. It was daunting and to add complications to all of this, there was an economic crisis where money was being borrowed at 25% interest in 1980. Yet, Joe prevailed, and while he never became a rich man, his legacy will be as the pioneer of the mussel industry in North America. He sold his mussel farm to one of his best friend, Russell Dockendorff in 1991. Joe received the Queen’s Golden Jubilee medal in 2002 for his work in both the tobacco and mussel industries.
Joe is survived by his son Henri (Evelyne), grandchildren Sophie and Sebastien, his deceased son John, grandson Kyle, great-grandson Ayden and his dearest friend and companion Agnes. Joe is also survived by his sister Rita, brother Etienne, late brothers and sisters Marcel, Rene, Willey, Blondine, as well as numerous nephews and nieces in Belgium. As well as his beloved in-laws in PEI, Ontario and America.
Joe’s family wishes to thank the many healthcare workers who gave Joe exemplary care during his illness, with special mention to the folks at the Palliative Care Centre.
Joe lived a full life that leaves a legacy that will bring pleasure to people forever, not many people can claim that. In lieu of flowers, memorial donations can be made to the PEI Palliative Care Centre . Online condolences may be shared on Van Den Bremt’s memorial page.
His son, Henri asks that you do something nice for a stranger unexpectedly and without explanation, and when you eat a feed of mussels, think of Joe.

Resting at Hennessey Cutcliffe Funeral Home, Joe’s wake will be held on Monday, September 13th from 3:00 to 6:00 p.m.. With COVID-19 restrictions in place, visitation will be by invitation. Funeral Service will be held in the funeral home chapel on Tuesday, September 14th at 11:00 a.m. by invitation only. The service will be available for viewing via live stream by visiting Joe’s obituary at www.islandowned.ca.
On-line condolences may be made at www.islandowned.ca.