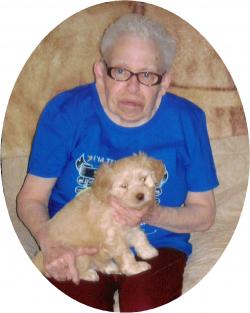 After a short illness, Jessie passed away at the Queen Elizabeth Hospital on Friday, November 29, 2019. Jessie Mae Ward of Charlottetown, age 81 years, beloved daughter of the late Eugene and Margaret (nee MacLeod) Ward. She will be sadly missed by her Bell family; her guardian, Jane Bell; John, Joanne, Michael, Joan and Frank Bell; nieces, Margaret, Darlene, Elizabeth, Linda Ward; her MacLeod cousins and her fur baby, Poppy. She was predeceased by her brother Eugene Ward; nephews Gene and George Ward and her loving aunt Betty Bell.

Resting at the Hennessey Cutcliffe Charlottetown Funeral Home until Tuesday morning, then transferred to St. Dunstan’s Basilica for Funeral Mass at 10 a.m. Interment to follow in the Roman Catholic Cemetery, Charlottetown.

If so desired, memorial contributions may be made to the PEI Humane Society.